(Thanks Jenna for reminding me how much this shits me.) 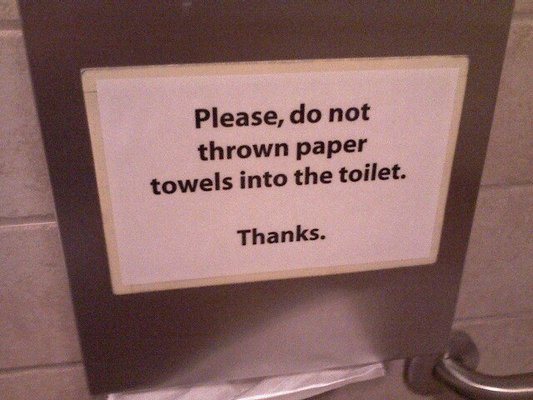 The person that typed this had to ignore several different typographical warnings that MS Word would have given them to reach this point.

From a very early age everyone is supposed to learn the ins-and-outs of the English language (or whichever your first language is). From your very first years in school, you learn the basics of grammar, spelling and writing. Why is it that when people hit the internet they suddenly regress into prep students? How hard is it to type out correct sentences with proper spelling, since you can actually reverse your mistakes without white-out!

I make plenty of mistakes writing this rubbish because hey, no ones perfect – but shit am I sick of reading stuff like, “Scary muvies b4 midnite R da bestt”. Your mind actually has to work harder to decipher that kind of dribble than it would if you’d just type it properly.

If English was a person holding onto a cliff by five fingers, people of the Internet would be kicking and breaking each one until it falls away into a void of nothingness. Even though we are a society that expects instantaneous updates, I don’t understand why some people just can’t seem to expend the extra five or so seconds required to type full words in a sentence.

I wish I could put make the creator of this fucking image walk the plank over a tank of sharks that haven’t eaten all summer.

In terms of Facebook status updates or tweets – is it that people feel their friends need to know about what colour their shit is STRAIGHT AWAY and not in the few seconds extra required to type out an enthralling description of its colour and texture? It has alot to do with the fact people have this huge desire to rush out whatever trivial information they want to share because they feel like the internet is waiting to hear about it. And if they don’t share it right now no one will know!

The internet is available 24/7, why rush!

In my eyes there is no excuse for poor use of language, even on something as trivial as Facebook because the fact you are even on there probably means you have the time to type it out properly. It’s also not a text message. I think awful abbreviations in SMS are justified if you can’t fit everything into one message and you are too cheap to pay for two. Otherwise they aren’t exempt.

There are whole other leagues of terrible use of the English language in written form. Lolcats and l33tspeak are two other pretty big examples on the internet. The terrible abbreviations used to emphasize the cuteness factor of an image run along similar lines, considering there is a high probability the person behind the sentence is a disgusting fat nerd. As for l33tspeak there is a 100% chance of a disgusting fat nerd behind each message.

What gets me as well is that you can even go onto websites written by huge media companies and find some awfully set-out articles with lots of spelling mistakes. This just stinks of laziness to me. Laziness from the from the sub-editors themselves.

Is it laziness causing the downfall of the language? The internet is just the vessel that everyone likes to blame, but when it comes down to it, it’s the lazy shit behind the keyboard. So stop being lazy and use what you learnt in primary school.

4 thoughts on “I Hate Lazy Grammar”