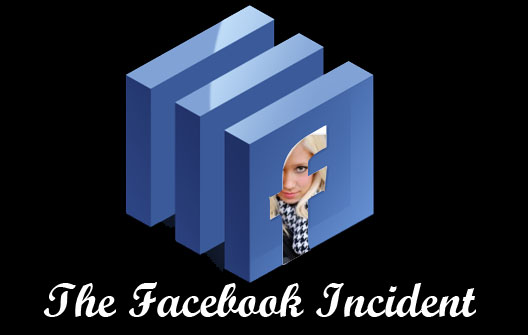 We did a direct profile comparison between May and Lily, found all the copy and pasted profile elements, and I found two-of-three profile images on some fashion websites. May had even added me herself, having never met “Guy” before. The only link to Guy for May, was from Lily, so if it wasn’t immediately obvious from about the first picture of Part Two of this story, it should be obvious now.

No longer was there a need to be patient in her reveal to Guy Flanahan. I didn’t even need to have a long elaborate conversation with May or Lily or whoever the fuck she was. All I had to do was put the evidence together in pictures, and give it to her. I’ve reused elements from all of the pictures I put together for May in all of the sections of this story up to now, so you’ve pretty much seen everything I gave to her in the reveal.

Innocent enough a question given that Guy has no idea who this May person is after just coming to Facebook, right?

Several hours passed. We are patient men. We were happy to wait for her reply. I was eagerly awaiting it after all of this effort.

The time was 5.30pm. I log into Guy Flanahan’s page holding my breath. I wipe the sweat off my forehead and breathe, when I notice there is a new notification. I click the link with gusto and set my eyes upon the reply. It was one none of us expected…

We were shocked… then proceeded to laugh our asses off for about 15 minutes. She was fucking serious! She met my fake person in a Valley nightclub, and I apparently bought her and her friends a drink… I was lost for words at her stupidity. I didn’t even bother waiting. I had already assembled the evidence and had it ready to hot link into my next post on May’s wall. I think pictures speak louder than words (it’s Facebook so remember to read from the bottom upwards):

If I could have had a cup there ready to catch her tears and drink them, I would have. The taste of victory from the tears running straight down her face. It was done. I had created a character that couldn’t possibly be linked to anyone for certain (until now), revealed to Ryan the true extent of his ex girlfriend’s stupidity, and made her meltdown live on the internet.

The mission was a huge success.

Did I feel good about everything that happened? Yes. Because she was being a manipulative little shit and trying to stalk a friend. I did not feel bad about outplaying her at her own bullshit at all. Would you?

Do I think it’s sad I had the time to construct such a ruse? To be honest, it was very easy and the way it played meant no questions were asked about my authenticity as Guy Flanahan anyway. The actual time required to execute this whole thing would amount to hours counted on one hand, and I think that’s okay.

Before May removed and blocked Guy Flanahan from both her profiles, as well as the many many unknown people that she’d added to create a life for this alter-ego, there was an admission of guilt: 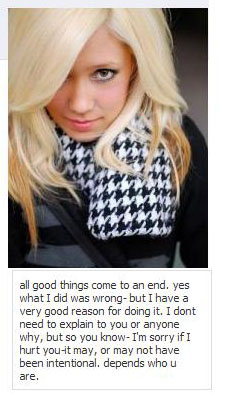 Pretty sure all that happened is that I smoked her out of the hole.

Because I consider myself a generally nice guy, I left her a kind parting note on May’s wall pointing out exactly what she’d done wrong and how to improve on it for next time (forgive me for wanting to rub it in her face a little more that I won):

What happened to Guy Flanahan? Well after this took place I had a bit of fun with him – Photoshopped him in photos with some mates, added everyone that was in on it and made occasionally funny status updates, and after that got stale I killed him. He died in a car accident. I created a Facebook Memorial group and everything…. Then I brought him back as “Reborn Guy Flanahan” (Facebook wouldn’t let him be “Undead Guy Flanahan”), photoshopped as a zombie in the depths of hell.

So yeah I really ran that one into the ground, but it was fun while it lasted. 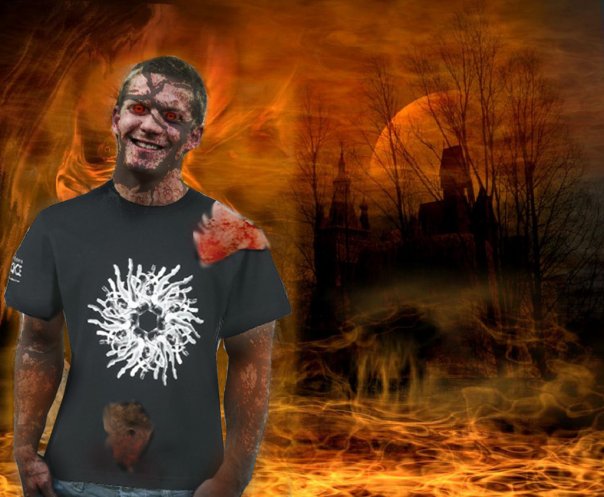 As for the story, well, May eventually renamed her alter-ego’s profile to an alternate version of her real name and updated it with pictures of herself. So now she’s just running two profiles as herself… The way I perceived it as it originally occurred, the alter-ego was an attempt to portray the image of the woman she really wanted to be, but wasn’t (and probably will never be) in real-life. A model having fun, mingling with attractive people, etc etc. Who knows if people like that ever wake-up to themselves.

I think we’ve learnt a few lessons here today – don’t fuck with friends of mine on Facebook using a fake profile, because it might not end well. If you’re going to make a fake profile, at least make it plausible. And finally; making alter-ego’s as an in-joke can be quite entertaining!

Until next time friends.