(2015 Comment: I guess I tried to go a little bit “video game history journalist” with this piece on a terrible game staring Shaq. I still own it.)

Once upon a time there was a video game. A video game that had it’s humble beginnings as a generic fighting game, ala Mortal Kombat, which was to turn into something more. A game that no one would or could ever forget. That game, is Shaq Fu – for Sega and Nintendo back in the mid nineties.

“But Sam”, you ask, “why are you talking about a game no ones probably heard of or even cares about?”. A valid question. The answer is, people need to know about this game and why it was so important. Allow me to explain.

Back in the 90’s there was a whole big fad regarding celebrity video game tie-in’s that arguably hasn’t gotten any better in the many years past. This trend started with a few important titles, Shaq Fu being one of them. The back story to Shaq Fu is thus; you are Shaquille O’neal. Yes. Shaq the basket-baller. While on your way to a charity basketball match, because Shaq is obviously such a good person, he manages to wander into a Kung Fu dojo in Tokyo, Japan.

Look, it might be hard to see but let me tell you, this game is bad.

This immediately raises several questions – A) What the fuck is Shaq doing in a fighting game, B) Why is he in Tokyo, since a giant black man in Tokyo wouldn’t cause attention, right? and C) Why would he wander into a Kung Fu dojo just out of the blue.

Anyway, the story continues (believe it or not). Whilst in this store, Shaq “stumbles” into another dimension where he is forced to rescue a young boy named Nezu from the evil mummy Sett-Ra… I promise you I am not making this up. This is an actual video game that had a team of people working on it that somehow didn’t realize how shitty this story was from the minute they sat at their boardroom table.

So before you even slot the game into your Sega or Nintendo, you have to be able to believe NBA basket-baller Shaq can travel alternate dimensions and fight using martial arts. The internet seems to believe that it was just a shitty fighting game that had no memorable characters to hopefully grab peoples attention, so the developers started talking to “celebrities” to get a hook for the game. Hence Shaq’s involvement. So they shoehorned Shaq into an already existing story that absolutely had no plausible relation to an NBA athlete.

That’d be my face too if I’d been associated with this piece of shit.

What an excellent formula for a video game.

So if the awful story wasn’t already ringing alarm bells for someone that was going to purchase this game, they probably deserved to buy it anyway. Once you got it home, as an excited child, eager to start a brand new game for your Sega or Nintendo, you realize within 10 minutes that you got handed the equivalent of a solitary confinement shit bucket that’s been festering for a month. And you are forced to eat it.

This game is so awful that it’s almost beyond words. Nevermind Shaq’s involvement, everything else about the game is terrible. The characters aren’t balanced at all, the story is obviously horrible, and the controls… are just awful. Essentially if you play as Shaq (which you have to in Story mode), you either walk really slowly towards your opponent that’s probably throwing shit at you, or jump the entire length of the screen. There is no middle ground. If you jump, you can’t have an exiting kick move like Mortal Kombat or something, you just kind of… jump… then have to wait for a chance to belt your opponent. But you can’t since you jumped the entire length of the screen away… Just Youtube clips of this game and you will understand.

The best part about the whole game is that there’s a picture of the developers on the first page of the manual. Like they were proud to be associated with it’s development. I kind of wonder what they think today.

And with that they never worked in the video game industry again.

Shaq Fu is so bad that it has a movement to find and destroy all copies of the game. And also a competing movement to save all copies of the game from destruction. To be fair, it takes something very big, either good or bad, to make nerds get up off the couch and actually act on something. If this video game causes nerds to act, then it’s seriously bad. Always remember, nerds are the laziest people on Earth.

Going to extreme lengths to rid the world of Shaq Fu.

As for me, I bought this game for entirely selfish reasons but don’t worry; I spent very little on it. I’d read all the reports, seen the photos and (sometimes) humorous videos of it’s destruction and I immediately knew I had to own it. It had to be a part of my collection (which is actually pretty good, apart from this game). I felt that I had to preserve it, to teach people about awful celebrity based video games, as it was one of the first cabs off the rank.The lessons everyone learnt from it’s creation were not only to come up with more appropriate games for celebrities, but also as an example of what not to do when creating a fighting game.

What I’d like to suggest to you today is, if you see a copy of this game for whatever archaic home gaming system no one has anymore, you should buy it. It could be worth alot of money some day, and it serves as an important message to the children of the future – Don’t grow up making shitty games with C-List celebrities as the main attraction. It just doesn’t work.

At least if the destruction effort is successful, my copy will be worth a whole lot more. 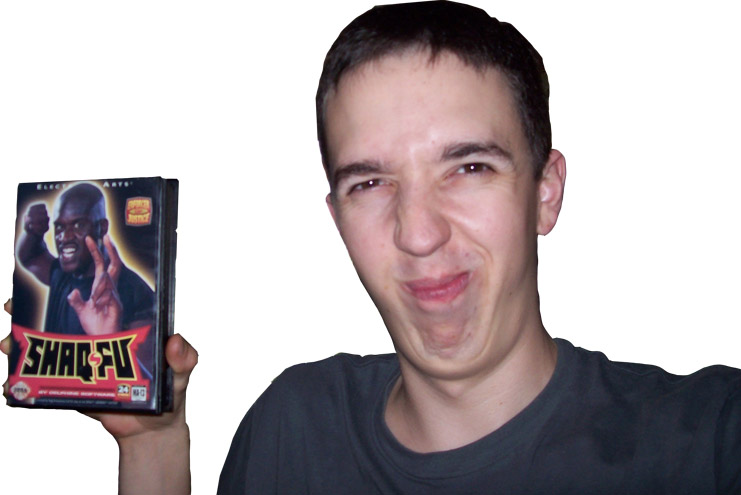