(2015 Comment: The ignorant politics of a 22-year-old. Although, they can stop sending me letters forever.)

Politicians. Probably the most incredible and impressive scam artists of all time, participating in what is likely the biggest conspiracy ever perpetrated. If only Today Tonight had enough room between shonky builders and dodgy cab drivers to cover this field of “excellence”. Generally most people can get away with just simply ignoring politics two years and ten months of every three year bracket. Unfortunately, it’s the in-between that’s impossible to get away from.

An election is called.

Everywhere you go, politics is there. The unionists with the retarded car stickers, the billboard ads, the television ads, the radio ads and lest we forget, many a defaced campaign sign in someones front yard. The people running in the campaign go on television every day talking about shit I just don’t care about (failing that, they say something that shits me instead), coming live from some electorate they’ve literally never visited before, but are visiting today because their advisers (or ‘puppeteers’ as I like to call them) told them it was probably in their best interest.

For once this is actually a photo I took. This car actually exists, plastered with these retarded political statements that no one cares about.

Every three years it’s as if they bolt cut the rusty padlock from the back shed and bring out granddads plastic covered couch from the 80s for an afternoon out in the sun. The more things change the more they stay the same. Let me detail for you exactly why I hate election time:

Yay I got a letter! Someone loves me!… oh.

You know, that the local member knows, that they’re stuffed at the next election based on the sheer number of letters he (or she) decides to send over the course of the election campaign. You can graph the number of letters received verses chance of re-election. More letters means less likely to win. Pictured is the third such letter that I have received from this particular candidate in the two weeks since the election’s been called. I should also point out that everyone living in my house got one of these letters as well.

Rather than spending $2.50 of tax payers money on whatever piece of shit glossy government “our party will do this for you! Vote for us!” bullshit spam letters, I’d rather they just send everyone a cheque to the same value. Watermark your god damn face on it for all I care, just have “With thanks, (political party)” on it and I’ll gladly cash it! Rather than waste anymore of your our money on glossy bullshit, how about just giving me some of my tax back? I wouldn’t mind! At least if one of you did it, you’d all start doing it. Think of the benefits… one party paying more than the next to win support… All the while we’re cashing cheques, happy just to be getting something back from you jerks for once! 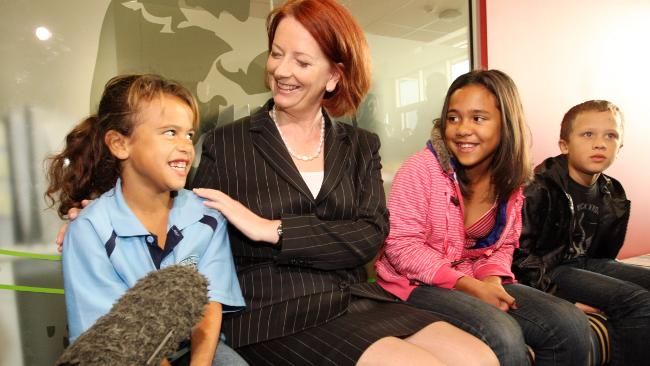 In an award winning shot, Gillard reaches the “Diamond Standard” of vote harvesting by being pictured with an indigenous child.

One of the most important facets to a politicians electoral campaign is being a huge media tart. One major component of that, photos with kids. A politician must be seen with children AT LEAST three days a week, and be photographed with them as often as possible during the campaign. Once elected, stuff the kids.

Bonus points apply if they are captured on video with the children, and one of them says something awkward but cute.

You see, a politicians every day press conference has about six people sculpting it on average. Kids throw a spanner in the mix. Their innocent and often hilarious “grabs” are often angled to show that the politician isn’t just a puppet with six hands up the ass. “Look at me! I sympathise with the family condition! Vote for me!”. The line writer sitting behind the facial mask quickly retorts the child with a warm and calm delivery, knowing votes have definitely been won after the prime time news airs that night.

Using “Social Networking” to ‘connect’ with the ‘Youth of Australia’
Look, I’m not buying it. I’m sure not adding you on Facebook to read what your minions are posting either. You people aren’t fooling us honestly. It’s quite clear none of you have any idea what Facebook, Twitter or even the internet is all about. Here are some facts: We know that most politicians are likely similar to our parents in age or OLDER and that, based on our parents grasp of computers, we can make a determination on your probable estimated abilities and understanding in these “new fangled dooby-wackers” called ‘computers’. And here’s the estimate: none of you have a clue at the end of the day. Sure, you can print out your Word document or whatever, but if it breaks you sure as hell don’t know what happened.

Maybe you’ve only subconsciously noticed it or just plain haven’t noticed it at all, but if you watch a politicians heavily choreographed press interview they will often have other party members standing behind them nodding in agreement. At everything. Just watch the people in the background in the next video grab of a politician on the news. Basically the idea is that their thoughts, the ones they believe in and that “the party believes in”, are subtly reinforced by deputy ministers nodding in the background. Once you’ve looked for it and seen it, it’s not very subtle anymore. Last time I checked, subliminal advertising or persuasion via subliminal means wasn’t very legal to perform on a broadcast service.

I won’t be changing my vote because some idiots nodded in the background of a press conference, that much I can tell you. Someone should round up all of the video footage that exists of politicians nodding in the background and send it to the Office of Film and Literature for classification. Seeing as they are generally theatrical grade performers, a new rating “B” for Bullshit and an age classification of NO ONE should be sufficient.

At the end of the day when it comes to politics, we are all buggered. It doesn’t matter who you vote for, it’s basically a dead heat because they all support shit no one likes. Maybe I’ll just draw a box and vote for Commissioner Gordon this time.