Over a hundred years, the “Commonwealth” designation has only really served as a vessel for the English to be remembered as the people who ‘discovered’ various countries or nations; our own included. As part of this discovery deal, we get the current monarch’s face on all our money. Woo. Let’s be honest here: day to day it means almost nothing. I’m not sure what the Queen’s done for us lately as esteemed members of the Commonwealth, though I imagine it levels somewhere between zero and fuck all. 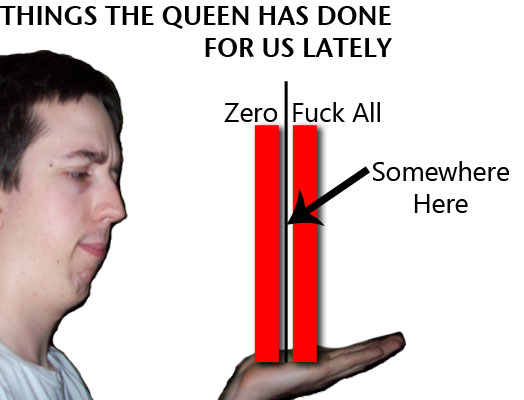 A convenient bar chart form of the previous sentence.

This time around, the CG committee decided in their infinite and apparently gloriously under-funded wisdom, that India should host it. Gee, hasn’t that decision panned out well for everyone concerned? Before proceedings even kicked-off, athletes were pulling out – not only over the state of their terrible athletes quarters but due to ‘security concerns’. Not to mention, stories of bridges falling down and facilities just generally not being ready.

Given India’s proximity with some shady nations, it was clearly a good choice for hosting an event that would draw everyone’s attention to one corner of the world for two weeks. I bet Osama was giddy in his little cave boots over the prospects of blowing up some international sports-people to international outrage.

Given my previously documented distaste for all sporting and sporting events, my dislike of the Commonwealth Games can’t be misunderstood. It has the same overload of media coverage, complete with Today Tonight beat-ups, and the usual proclamations of “this is the best games ever!” from the organisers. Yawn. India had almost five years to get ready for the games and they still couldn’t do it.

“This looks like a safe, clean, structurally sound country! India to host the games, it is!”

Then there’s the usual interruption to your regular television programming for two weeks. Competing commercial networks that didn’t win/want the rights to rebroadcast some major American broadcaster’s coverage of the Games, will often hold back new episodes or run repeats over the two weeks because they can’t get the audiences to justify anything new. Yawn again.

Generally I don’t even care about that (illegal downloading, etc), but this time something was different. Even before the Games I had come across a certain piece of information about a guilty pleasure of mine. A show I liked… was being delayed for the Games. A show trying to make it’s return after 10 years. That’s right punks… Hey Hey It’s Saturday.

God forbid I should be allowed to take in the nostalgic antics of Daryl, the Dick and the Duck before the end of the games! Nevermind that it’s likely to get axed at the end of the year again anyway, I still hold hope that it’ll be around for a while. And while both have been touted as irrelevant in 2010, I’ll still be there to watch Hey Hey. Can’t say the same of the Games.

I can’t even remember where the last one was held. It’s been so boring and poorly managed this time around that organisers have barely filled stadiums with an audience! 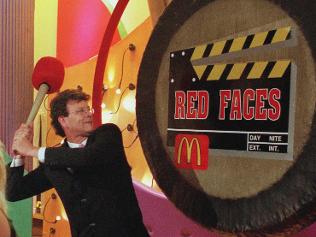 The Commonwealth Games gets the gong.

At the end of the day I don’t really give a shit what backwater country they choose for similarly insignificant events. What I do care about is my lame broadcast television shows, broadcast on time to break up the mediocrity of boring old life.

6 thoughts on “I Hate The Commonwealth Games”