As a long term bachelor, there is only one thing I hate more than being desperately alone: cooking. Not to mention, as a long term bachelor I also watch a lot of television. Imagine my irritation when I’m presented with some guy wearing a cravat in an inappropriate climate judging stupid meals made by nobodies for hours-and-hours a week, and told to eat it.

“Oh!” you exclaim, “But it gets people excited about cooking and makes them want to be chefs!”. Well imagine their surprise when they find themselves standing in front of deep fryers in 40c Queensland summers, cooking for unappreciative people at a shit wage. The actual reality of being a working chef is much worse than Matt Preston and co try and shove down your throat. Definitely not a glamorous industry. Unless you seriously have a passion for cooking and love working under pressure, chefing is pretty terrible. “I used to be a Chef” is a pretty common thing to hear.

Masterchef is just another reality show; one that’s been created by Ten and one that will get run into the ground by Ten, just like Big Brother. You know it, I know it. Remember how happy you were when you found out Big Brother was finally getting the axe many years after it should have? I do! It was the best day of 2008! Network Ten is literally pulling the same behavioural pattern.

Just the other day I saw some Masterchef contestant from the last season cooking some sort of concoction, during the 5pm news. Wow! Watch as this former contestant makes something over three short weather segments! Woohoo! Look at that former contestant go! Cooking some food! I’m going to watch all those weather segments now! All the while that person’s appearance in that segment is subliminally reminding you that yes, Masterchef did happen this year, and that you shouldn’t forget about it while it’s off television.

I don’t give them enough credit – they figured out how to fill the gap between ‘normal’ seasons with a personal favourite gimmick of mine. How do they continue exploiting Masterchef while it’s in an off-season, and simultaneously keep Chief Goblin Matt Preston in a job? They needed something to remind us that we should be buying all those products used in the show and/or with contestants faces on them, whilst keeping the main show “on-the-boil”. Why, with cute kids of course! People love kids! Kids + new hot-favourite cooking show = mid-season problem solver!

If you look at this picture and think “She’s so cute stirring that pan!”, instead of “Fuck I hate this show, where’s the remote?”, then it’s you. Yes, you. You’re the type of impressionable idiot they want watching and buying all products linked to Masterchef. You’re the idiot making them a shitload of money.

“Hand those fucking kids knives Johnson, we’ve got a hit on our hands!”, and with that, you as Joe-Blow Consumer, were sold again on Masterchef. “Oh look how cute he is making that chocolate cake!” Please. I’d rather wash my face with sulphuric acid than watch that shit. But like older brother, Big Brother, it doesn’t end there! Former contestants are getting their own spin-offs, food brands/sponsorship deals, cook books, awful women’s magazine cover stories and appearances on completely unrelated current affairs shows cashing in on the ‘phenomenon’ of Masterchef.

So one day you just turn the television off and walk outside, hoping to catch a break from the constant Masterchef bombardment. You get a ways down the street before you come across a billboard advertising a product used in the show. You become disheartened, but continue on. Next intersection you walk past a street vendor selling newspapers; front cover? “Masterchef semi-finals dish up ratings for dinner!” and a blurb about Hey Hey It’s Saturday getting fisted in those same ratings. You feel the tears welling, but keep walking. Soon your phone rings. It’s a friend! “Hello friend!”, you answer with heightened spirits, “how are you!?”. “Just been watching some of that Masterchef and…” 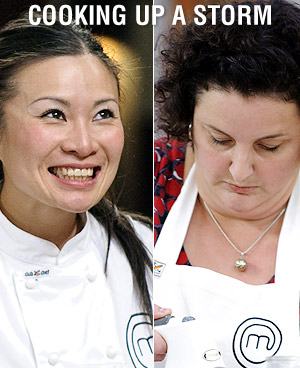 So many cooking puns in media headlines, so little sanity remaining.

Your friends words continue but by the end of the word “chef” you have tuned out. Suddenly your vision turns red, not unlike that one time you listened to Ben Lee, and it’s getting darker. You wakeup 5 hours later and you’ve killed the entire neighbourhood. Everyone’s dead. The End.

5 thoughts on “I Hate Cooking Shows”