Question Six – Is it socially acceptable to use a fork as a knife?

Ah yes. A question that has plagued man since the dawn of utensils and formal dinner parties. Could it be that you have just one limb with which to hold a utensil because of a previous and unfortunate cooking incident? Or could it be that you’re just too lazy to get a knife to go with whatever soulless creation you’re eating? Whatever your perceivable disability, I’m here to set the record straight on Forknifing.

The Knife and Fork are a result of countless years of careful trial and tribulation, mastered for the wealthy and lazy white-collar person in all of us. Invented when an apelike American couldn’t figure out how to properly utilise and master the distinctly foreign ‘Chopsticks’ as an eating implement, the Knife and Fork provide a one-two punch combo of being able to get a firm grip on food, whilst subsequently being able to cut into smaller portions. Much easier to master than two matchsticks for the whiteman with giant and not particularly dexterous hands (seriously I have no idea how to use those god damn things properly, even now).

For the rest of us not-chopstick-capable people, the Knife and Fork are very important. But what happens if you simply want to consolidate to one utensil? Can such a thing be done? Should it be done? Obviously you can’t consolidate your eating utensils to simply a knife, as you cannot easily pickup and shovel your slops with that. Given the four prong, solid edge design of the fork, it is the only one of the two main utensils that can in fact be utilised as a (very) blunt cutting implement; apart from the knife itself obviously! Perhaps this was a secret part of the initial design!

Utensil consolidation happens in acceptable ways all the time. Don’t have a teaspoon to stir your coffee? Then any kind of flat and clean object will suffice as a stirrer! An example of an acceptable situation that no one would comment on in day-to-day life as something ‘out of the ordinary’, I’m sure you can agree.

Given that, why would using a fork as a knife be any different? 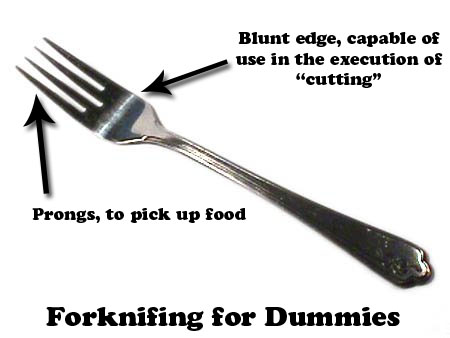 Just incase you couldn’t figure out the mechanics of Forknifing by this point.

Personally, I feel I am quite adept at the concept of ‘Forknifing’. Maybe I’m eating a pasta at home. Maybe there’s a bit of meat in it that’s ever so slightly too big. With no knife handy, and no desire to temporarily vacate my cushioned seat, I am more than willing to use the fork in a way society may deem inappropriate. It’s not even a question to me. At home, it is not inappropriate at all. Who else is going to criticise you about it?

But I can see you sitting there asking, “What if I’m at a restaurant or someone’s house!?”. If you’re with friends? I think it’d pass without a look. If you’re trying to make a good impression at a business luncheon or some sort of corporate shit I can’t relate to, then maybe there’d be questions about it. If I didn’t know you and I was in that situation, even I would probably harbour a judgement that you might be an untrained ape trying to use something as a knife that’s not a knife.

This conundrum of utensil substitution is extremely situational. The stigma towards it is hard to understand given widespread allowance of the “alternative stirrer” for coffee, therefore I naturally assume Forknifing should be okay in all situations, as long as you observe most of the other table manners accepted by society at any given time. Maybe some people are just prudes. The people that don’t like it I mean. Maybe they just don’t like the idea of a hard spiky object slicing something up the middle inappropriately, you know. Bringing back too many bad memories? I can’t be certain. 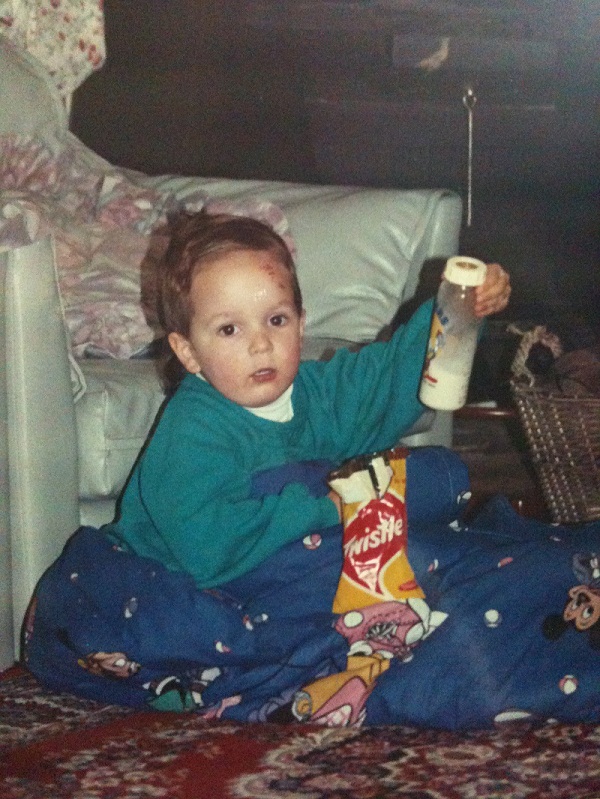 ‘Spose I could always just regress to eating with my fingers…

The fact is, it’s easier to sit wherever you are and just make do with Forknifing certain foods. Pasta, pizzas (if you aren’t eating that with your hands… for some reason), pasta salad, potato anything… the possibilities for forknifing are almost endless. It just won’t do for steak though.

Sure, we could all sit up straight, elbows hanging off the table, with the appropriate napkins and tables manners; or we could reduce ourselves to cutting shit with a fork. That’s the choice I’ve made. Its 2011 now and time savings everywhere are important. Why create more effort for yourself? (Seriously though if you’re eating a steak you should probably just get up and get a god damn knife before it goes cold)

With the regressions that go on in everyday life, in clothing (High. Wasted. 90s. Denim. Shorts.), language (Do U kno wot I mean?) and intelligence, I think we can afford to let eating habits slide too. For the better. I guess you’re stuffed if you don’t have any spoons for soup though…