My name is Sam and I’m not normally an angry person. Actually, you wouldn’t know because this is the second sentence and similarly I don’t know anyone working for your fine company. Suffice is to say, I’m typically not all that mad. As the weeks have dragged on though, I’ve had a certain creeping sense of irritation. Kind of like an itch that you just can’t seem to reach. One irritated skin cell at a time, the eternally unreachable itch has persisted and evolved into a full blown case of shingles.

Let’s face it – Coke has been a household name for a very, very long time. People have linked “Coke” with generic Cola drinks as long as you’ve existed. Cola is Coke and Coke is Cola. People ask for Coke and get Pepsi post-mix, without even knowing the difference. You’ve had celebrities like Bill Cosby, J-Lo, Kobe Bryant and even “Wierd Al” endorse the product. It’s a name that has almost infinite brand value.

Sure, as the years have gone on I can understand that it’s probably gotten harder and harder to come up with new and exciting ways to remind everybody what you’re all about. On occasion, good marketing simply requires a stroke of genius and brilliant innovation from a team of well paid gurus to turn around a shitty image or C.S.I. enhance-enhance-enhance an existing one. Just look at Qantas right now. God knows they’re doing their best to throw freebies at their burnt customers worldwide in an effort to make amends. All I know is, if I was stuck in some backwater country with Qantas as my only escape route and they dropped that on me I’d probably never fly with them again, but I digress; 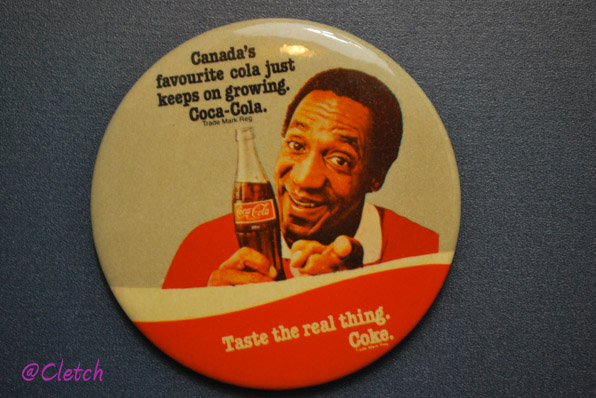 Bill Cosby gets paid for the darnedest things.

It’s that stroke of genius that I’m writing to you about. Quite simply, to come up with a campaign that has managed to harness the stupidity and lack of individual will power seen in many thousands and thousands of internet users in this country, such as it has, is the kind of genius that is almost impossible to duplicate. In my twenty-four years on this planet, I think your current campaign is probably the most brilliant yet.

Here’s a long existing product – and here’s a relatively new social networking phenomenon. How do you combine the two? Do some semi-creative work in Photoshop, and voila! All of a sudden you’re printing the most popular of contemporary Australian names on one side of each bottle! Brilliant! But it goes much further than that. What do people do when they find a name that matches somebody in their friends or family group? They post it on Facebook, then tag them in it.

For some reason people, find it amazing that they managed to randomly select a bottle that just happened to have someone they know’s name printed on it. In short: most of Australia is dumb.

How many people are on each persons friends list? A random sample of my own list shows me, a few hundred. What happens when someone gets tagged? All of their friends see it. So that’s the posters friends, and the friends of the friend tagged that can see it immediately (in most cases). Head spinning yet? Marketing is at it’s best when it knows it can prey on the sheer sheep-like mentality and stupidity of it’s target audience and utilize it to full effect.

But you already know the brilliance of this, don’t you? That’s fine. Because what you don’t know is that the previously impervious and uncaring Samuel writing you this letter, actually does care and is mad about the situation. Here is the reason: 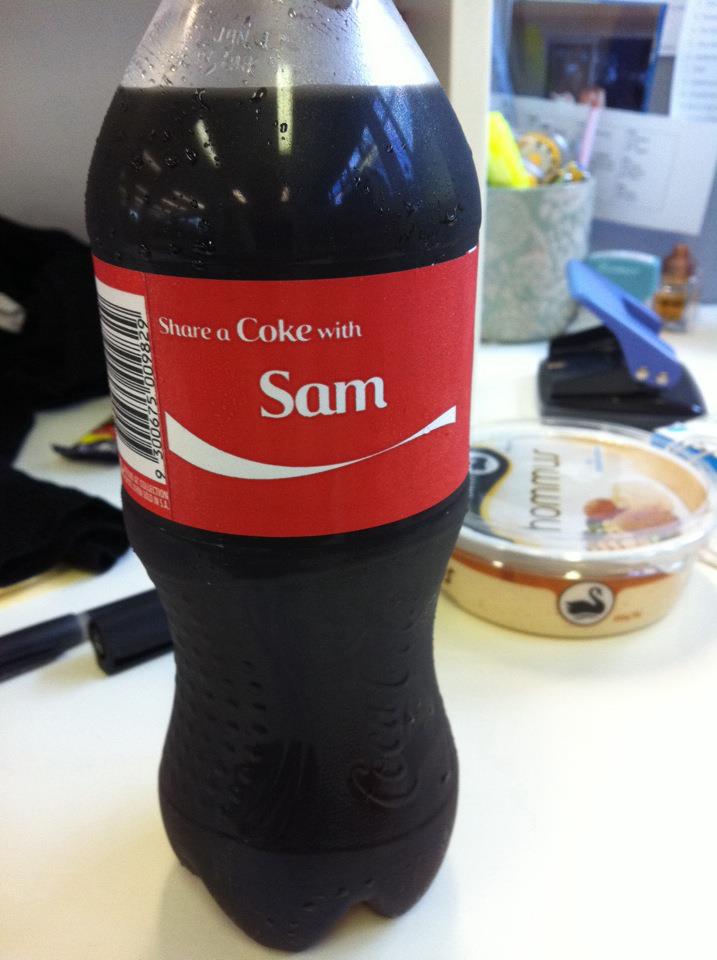 My name. Or an abbreviation there of. On your product. Being posted and shared amongst thousands of stupid internet users. But why? I’m not stupid and/or impressionable in such a fashion. If I happen to see a bottle with a significant relations name on it, I’m sure as hell not whipping out my phone to possibly expose your brand to hundreds, because I know that some automatic printing and random-chance-drawing has resulted in me selecting such a bottle. I’m certainly not sharing your product with any of those fine people, because I respect them enough to hope that they wouldn’t be stupid enough to fall into the center of your (otherwise brilliant) viral marketing rabbit trap (also I’m selfish when it comes to drinks sometimes).

Every time I see somebody post a Coke bottle on their Facebook wall, I die a little inside. I die, simply because it’s in that exact moment that I realise I’ve spent time talking to somebody that actually managed to fall into that most blatant viral marketing rabbit trap. Quite simply, I’m not sharing a damn Coke with anybody. The fact my name could even possibly be on the bottle just galvanises me into hating the brand. It’s that personality trait of mine where I hate anything that gets flogged into oblivion, and purposely make an effort not to see it or be a part of it (Lord of the Rings – still to this day have not seen it). The trait’s just being exercised in a slightly different form – against viral advertising.

Don’t forget, like Coca-Cola did, that bogans drink it too.

Basically, the aforementioned brilliance of the free marketing pushed on me constantly by my IQ-deficient friends on Facebook, is actually working against you and making me hate the brand.

Many, many severe hangovers from cola-supported drinks, and royalty-free uses of an abbreviation of my name aside, there are in fact victims of this campaign. Sure, you managed to print the top 150 of Australia’s most common names – but what about everyone else? What about the Mohammad’s, the Troy’s or the Dwight’s of the world? As I scratch away at that unreachable itch every moment while writing you this letter today, please spare a thought for all of the bogans whose names you’ve missed as well – infact, here’s a Coke for all the Ash-Leigh’s, Brytnee’s, Erlinda’s, Jazabel’s, Keyron’s, Skyelah’s, Tannayah’s and Zayden’s of the world.

They have an expensive computer they can’t use from a temporarily interest free loan that they can’t pay back anyway – so don’t bother directing them to your Facebook page where they can send each other “virtual” cans with their poorly spelt names on them.

Thanks for your time.

P.S. This post has probably generated more free advertising. Guess you can share a Coke with me too, right?

2 thoughts on “A Letter to Coca-Cola”