Once upon a time in the fantasy land of Australia, the retail sector was a glorious thing. At a time when there was no internet, very expensive international flights and colluding importers – who could basically market a product at any price they liked and have consumers pay it happily. It was a golden time of sunshine and rainbows. Consumers got what they wanted and didn’t know better on pricing, except maybe from fleeting phone calls from abroad, and distributors made extortionist profit margins.

As months turned into years, and years into decades, everyone got complacent. “Of course they’ll keep paying” – what had to be the general motto among them at the time. As the days raced forward, there was suddenly a swift cool change in the air – a storm was brewing. The retail sector tried to put it at the back of their mind, but as the days kept ticking and the cash flow slowed – as their revenues slid – they wondered what was going on.

A harsh but inevitable reality if things don’t change.

What was happening? All of a sudden the market wasn’t accepting what was once deemed ‘reasonable’ pricing. Even throughout the 90s, retail businesses were safe. The internet existed, but was very much still in it’s infancy with nary an online shopfront. There were plenty of Web 1.0 GIF filled sites on Geocities though. Awful decor aside, you still had to visit bricks and mortar storefronts to buy everyday goods and gadgets.

But after decades of a closed and monopolised market, something did actually happen while the retail sector was laying on their 5-Year Interest Free payment plan couches, wearing a sleep mask. The Australian Dollar slammed through the magical US$1 mark, the internet moved onto funny pictures of cats and, more importantly, started developing major online shopfronts. Though Telstra tried as hard as they could in the late 90s and even into the last decade to stifle broadband internet and competition at every single fucking level, eventually even they failed and had to give in.

Most people now have access to reasonable broadband. And online shopfronts. Suddenly the jig was up. Any Australian consumers with half a brain were outraged! “YOU MEAN TO TELL ME THAT A VIDEO GAME COST LITERALLY DOUBLE HERE FOR OVER A DECADE!?!?!?! WHAT THE FUCK!”, you screamed, as you furiously imported as much as you could from our friends in many countries world over. The funny thing is, those video games I allude to are still priced in such a manner even now. 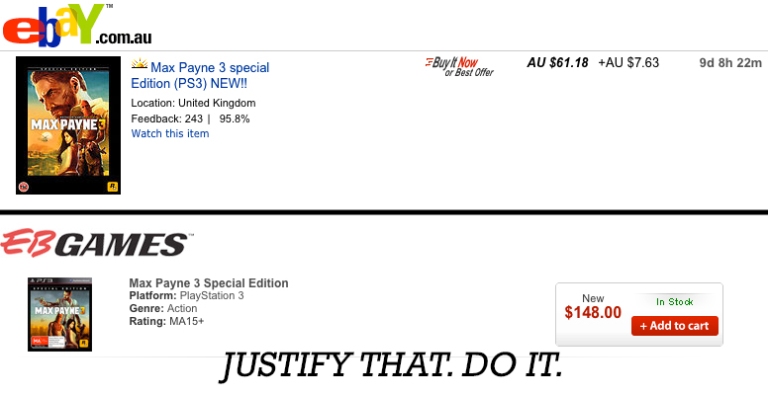 This is an example I looked up today. Give me one good reason that you wouldn’t wait 7 days and import it from the UK for a saving well over 100%. Scared of it getting lost in the mail? Don’t worry, you could still buy another one and have it be less than the single copy from EB Games.

While I’m using video games as a very important example, the dollar translation problem is not exclusive to that market. Even with shipping and tax on big ticket items over $1000, in many cases you can still make a significant saving by importing.

This makes retail sector kingpins like Gerry “Harvey Norman” Harvey and Dick Smith seethe with anger. They are angry that you have found major savings by shopping online, instead of in their stores. “We can’t compete!” they said, “Tax imports under $1000! NOW!” they said, “We have to pay Australian wages and taxes!” they said – all of this with flailing arms, red faces and STREAMS of tears.

Meanwhile I’ve been sitting in my office chair, surrounded by shit I didn’t buy in any of their stores. It even got delivered to my house! For a small fee of course. But still, it’s personal, quick and almost always CHEAPER.

Yes, that’s right – I’m the guy that’s killing Australian retail by shopping off-shore. I’m the guy Gerry Harvey and Dick Smith are talking about when they go on their well publicized rampages on Today Tonight and A Current Affair. Shhh, better not tell anyone how the publicity from those tirades ends up being a free advertising venture, with their business names slapped up everywhere. Meanwhile as ‘that guy’ – I’m not alone. There’s clearly many of us out here. 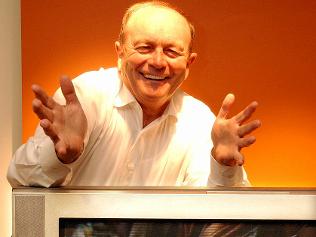 “…we’ll make a tax thiiiiis big, then they’ll be forced to come back to me! Mwahahahaha!” – Evil Dark Retail Overlord, Gerry Harvey

The fact is, even with a 10% GST imposed on imports under $1000, you would still be paying less for most imports than what they’re providing in store. While Gerry and his merry band of retail allies seem to think that removing the magical 10% GST saving, will somehow force me to walk into their stores and happily buy shit for extortionist pricing like the glory days – they are incorrect. I see this public government muscling as an attempt to further shit on consumers by imposing a tax that suits him and his business.

Given this realization, I’ve decided to give them some free advice. That’s right – free! No interest free over a thousand years con-job. Real old fashioned, honest advice. This is the key to me shopping locally again: MAKE BETTER DEALS WITH YOUR DISTRIBUTORS. If they don’t budge, DON’T FUCKING USE THEM. This is not rocket science. Your (as an industry) inability or lack of desire to ADAPT your business model to changing times, ironically similar to what the music industry does too, will not work and you will cease to exist. Because I will not resume paying double for anything, ever.

I guess you could just convert to being a supermarket. We’ll at least always have to buy perishables locally!

Cry to me all you like about Australian jobs and taxes and having to pay wages and rents and yada yada yada – no one wants to hear your fucking excuses. I’m still not going to shop with you until you provide me with a similar price. If this means a radical change, you’re going to have to carry it out. Sure, it would be very sad to see bulk job cuts locally to facilitate this, but that’s life and I’m sure this ultimate outcome is merely being delayed anyway. I’d probably be willing to pay within 10% of the target US$ price locally – for the convenience and saving on shipping. That’s what shopping locally should provide me – convenience – because that’s the only real selling point you have left.

That’s my tip for you, Gerry. Like the circumstances, or lump them.

3 thoughts on “I Hate “The Retail Sector””