Once upon a time in a galaxy an arms reach away, there existed a land of constant celebration. A strange, relatively new world; a realm where fresh human achievement is forever front and center. You are but one of the first generation to encounter the turbulent waves indirectly produced by its existence. In a place where nothing is certain and no single day follows a recognizable pattern, you eventually see yourself amongst many others; rowing on the open sea toward a single source of light, beaming out through a hazy horizon. Determined, you are in a constant battle for forward momentum against the rapid flows. Further and further you row; the light becoming ever brighter with each exertion.

As the light becomes more intense, you are suddenly bombarded by waves gaining height with each heave of the paddles. All you can do is watch as those around you get thrown into each other, multiplying into miniature versions. Some simply split apart, while others on the edge manage to escape the elements. Each wave brings with it a horrific new picture, most of them taken by the very person in the photograph itself. From cats to strangled cats, memes to shittier memes, conspiracies, and political views attached to posts made of shit; the sea quickly swirls out of control, sucking you, all light and all matter into a blackhole… with a flashing blue center.

Your eyes suddenly open. You slowly focus… it’s your phone; it’s notification light flashing away as it lay on your bedside table. A pin point in the dark.

The tumultuous sea was only a nightmare. Or was it?

The fact is, so many of us are addicted to the highs and many, many lows of social media that we can’t even escape it in our dreams. If I were a gambling man – and I am – I bet you, if I randomly vox-popped people on the street with the question, “what is the very first thing you do when you wake up?” I can almost guarantee a substantial lean towards the response, “I check my phone”. Emails, Facebook, missed calls – whatever it is, it doesn’t fucking matter: the WiFi enabled mobile phone has your undivided attention. I’m certainly guilty of it. Such is our addiction to carrying out a virtual existence for our “friends” and “followers” to see. Or is it?

Never before have we been connected to such an extent that I can check on the quality of somebody else’s lunch from a thousand kilometres away. And while that kind of update to a friends list of hundreds is a ‘shit post’ of the highest caliber, that doesn’t stop you from doing it. Because you are hungry; so hungry for content that you would feed someone else’s hunger for irrelevant content, hoping they will then turn and give you a meal of the same quality. An everlasting “You scratch my back, I scratch yours” kind of arrangement. Motivational after motivational, shit post after shit post. But social media engagement goes much further than the simple shit post about felines. Your asinine updates are but one piece of the puzzle that is Social Interaction™ in 2015.

For all of it’s benefits, the convenience of social media has a shitload of negatives too. The instantaneous nature of the beast amplifies any existing social problems by an undisclosed factor. For example; as wave after wave of girls reassure each other about their looks in the midst of social engagements where they’re clearly done up to the 9s, all of those shitty “you should look this way” image problems get to thrive unabated. People prone to bouts of depression that post “cries for help” often get ignored because it’s a too hard basket for anyone on their “friends list” – simply not light-hearted enough for your daily dose of internet. Fractured relationships can spiral out of control into streams of half-deleted posts that everyone ends up regretting – the practical examples are almost endless; just coast through your fucking News Feed right now. Social media interactions are often a reflection of people’s real day-to-day lives, though with one key caveat: only if it’s convenient.

Once upon a time, the people you considered “friends” would be the very same people you would hang-out/share sweet nothings with. Now we seem to exist in a constantly-connected reality where we can micro-manage each other into oblivion. Friends are now a currency, or American time-shares (if you will); locked away in a constant battle for attention. Obviously you still maintain your actual friends on a more personal basis, but it’s kind of human nature to seek constant reassurance – someone to tell you “you know what, you’re alright”. Reassurance for every photo of your shitty meal/baby/animal/workplace/significant other/hobby/etc. But what if someone actually wants to talk to you? ON THE INTERNET!?!?

As far as I can tell, many people have simply transformed into assholes in order to deal with the behemoth of instant-communications – it’s potential audience of your acquaintances often numbering into the hundreds. That’s right – you could be an asshole, while reading this very sentence. Want to know how your social charade is revealed? “Seen.” 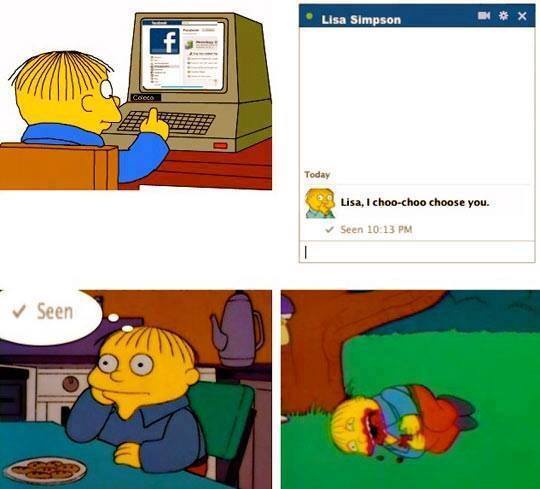 A classic Simpsons moment updated for a new generation of asshole.

You’re guilty, I’m guilty. Don’t even try to deny it. And while we’re all busy previewing half a message in the Android notifications screen so as to not trigger that “seen” notification, your “friend” is sitting there watching; waiting for you to respond. Jumping into the tumultuous sea in a leaky old raft, paddling in vein towards the notification light of your smartphone. We’re assholes the second we make a decision to open the messages in any form – because you wouldn’t open it if you weren’t intent on reading it at all; your addiction to the mere act of consumption, revealing itself. We’re like all those kids glued to their devices in social situations, being constantly nagged by irritated parents to participate. I know, there are only so many god damn seconds in the day to interact with a potential audience of hundreds, but the fact someone has gone out of their way to contact you should still mean something. Digital correspondence is a constant arm wrestle being fought, with someone else constantly tapping you on the shoulder.

For all the cool “Hey, look at me! Check out my fucking ridiculous selfie stick!” posts, there’s an equal number of people sailing past actual life achievements in a tidal wave of ambivalence, preferring to eat your shit posts for breakfast. Others get to sit there, processing the nothingness of “seen” like an addict waiting for his/her’s next hit of attention. There’s probably a PHD waiting to be written about the psychological effects of being ignored by someone you can’t see. And while there’s a multitude of valid reasons for ignoring messages, most of them are shitty and a direct consequence of being hammered for attention constantly.

I appreciate “me” time as much as the next person, but there’s always a limit. You can only micro-manage and water down social interaction for so long. All I know, is being ignored fucking pisses me off and I imagine it will continue to do so well into the future.

At least ignore me in person so I can hate directly at you.