Allow me to begin with this:

No, let me tell you one time. YOU ARE AWFUL.

This picture embodies almost every single thing I hate about Justin Bieber (except the terrible ‘music’ of course). Slick marketing? Check. Appealing to teenage girls and people that like shit pop music, by utilising key words such as “love”, “heart”, “angel”, etc? Yep. Pretentious “teenage heart-throb”? Well I can’t answer the ‘heart throb’ part, but I can definitely tell you the slimy little bastard is pretentious.

Nevermind the fact that he’s likely lacking any hair follicles on/around his ‘gentlemen sausage’, as Jeremy Clarkson would put it, Justin Bieber drones about heavy topics and does some serious shit. No really, seriously heavy topics. Did you know that he threw a party at Usher’s house for his first shitty video? Bet you didn’t. Bet you also didn’t know there’s not a single ounce of beer or spirit or naked women in any part of that video. It’s all about clean family fun these days, right everyone! This is ironic, because as far as I could tell (by perusing Youtube), he has picked one topic in particular to push out auto-tuned records about: Girls. That really challenges 4Chan’s general consensus of him being “a giant faggot” don’t you think?

Blame Canada, and also very much blame Usher’s label for inflicting this… thing… on us.

All of his songs are exactly the same. This 15 year old is a prodigy of the art of remix. Puff Daddy hasn’t got shit on this kid, and for one reason: Justin Bieber has figured out how to turn exactly one original song into an infinite number of other hits with exactly the same lyrics and idea behind them. Well, he would be a genius but I doubt he’s responsible for writing any of it. Short of quoting the whole lyrics of every single song and pointing out similarities, I present to you “The Bieber Challenge” – which is to go on Youtube, find his ‘hits’ and see how many similarities between each song you can find. I lost count.

Here are his ‘hits’ summed up for those lazy people playing at home:

I could go on and on but that would mean having Bieber inflicted on me long enough that I might develop a serious medical condition. If you haven’t picked it up yet, his one song and subsequent remixes are all about wooing girls, love, heartbreak and heaven. The fact this human has managed to spin himself such a hype train with one song remixed over 12 times, is kind of irritating. I could remix this article 12 times and maybe have that many readers, if I’m lucky.

Everything about Bieber is a carefully constructed, music industry exploitation of a child to sell a shitload of records, ala Michael Jackson. His hype train and teens getting crushed at awful lip-synced concerts are a direct result of having albums full of one song remixed fourteen times. His ‘cute’ preteen innocent image, featuring songs about love lost and his vague 15 year old hopes of finding love are a caustic acid to the rest of the population that are above 17 years of age.

He is not an adult. How can he sing two albums with fourteen remixes of the same song about love lost? At fifteen (or whatever age) you haven’t even loved anyone yet god damn it. YOU ARE STILL A CHILD. That and the gullible parents money paying for this bullshit. It’s you people that keep him going. 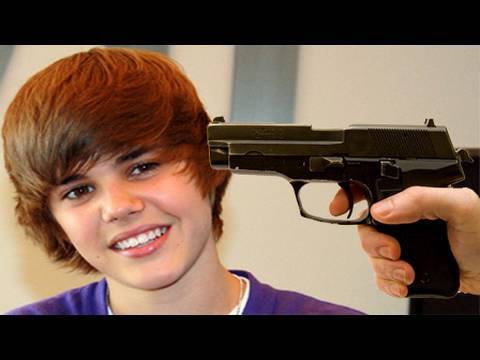 Don’t even get me started on the fact his voice is mostly fabricated by a computer. Though many stars are in that boat today… So let’s just update ourselves here: Justin Bieber is a preteen, computer fabricated, music industry exploited, awful pop music creating abomination, inflicted on the entire world by another awful pop star of the same calibre (Usher). Thanks a lot.

Justin Bieber is the epitome of truly awful pop music. In his brief career he’s already had a 4chan hate train against him, and to be honest that’s probably his crowning achievement. To be so hated that the biggest anonymous forum on the internet starts sabotaging Google and Twitter trends regarding a (unfortunately) false rumour of death, you know you have to be doing something wrong.

If you’re buying this kids preteen shit smeared on a compact disc, magazines with his face on them, listening to radio stations playing him and watching music videos on television featuring our dear friend, all the while ignoring the glaringly obvious fact he is truly awful, then you’re just as bad as a 16 year old getting crushed in the front row of a show he hasn’t even turned up to yet. Get a grip on your life. Evaluate. Consider what you are doing.

With any luck, in two years he’ll be on the scrap heap of child stars that failed to progress through awkward teen years into a ‘respectable’ adult artist. Who am I kidding, as an adult performer he wouldn’t be any better than a neat coil of dog shit on the sidewalk.

One thought on “I Hate Justin Bieber”